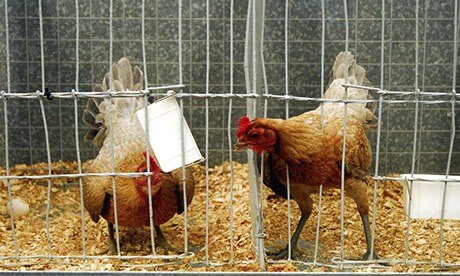 Chickens on display at an agricultural show. Photograph: Sheldon Levis/Alamy

The onset of autumn and beginning of winter may seem an unusual time for showing livestock, especially as all the agricultural shows have long since packed up their marquees, but it’s prime time when it comes to poultry.

If you consider the behaviour and life cycle of domestic poultry you can see the logic. In most cases, breeding groups are put together at the beginning of the calendar year, and by late January, early February (given good light and favourable weather conditions) the females will come into lay and the males will start to tread them. The resulting fertilised eggs will be set under broody hens or in incubators and, in the case of chickens, 21 days later the first batch of chicks will have hatched.

The youngsters reach adulthood usually between 25-35 weeks; thinking back, for a first-year bird to look in its prime when it reaches poultry showing season, it ideally needs to have hatched no later than April.

If it’s older adult stock that’s going to be shown, then an appreciation of the natural lifecycle needs to be applied again. Birds moult annually; this tends to occur in late summer, early autumn, although different breeds, and indeed different birds, will moult and regrow their feathers at different rates. Just like the young growers, they are usually looking their freshly-plumed best around October/November time. So it should come as no surprise that The National Poultry Show, organised and run by the Poultry Club of Great Britain lands in the middle of November (November 16 and 17 at Stoneleigh Park in Warwickshire to be precise). 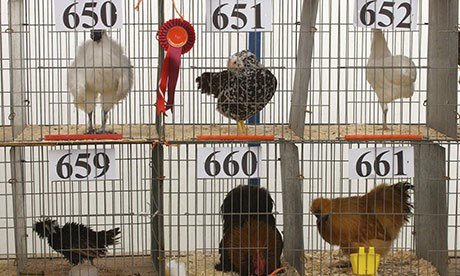 
Being able to manage your poultry so they look their best on the weekend of the show is a key skill, but there are other considerations too. At poultry shows, chickens are placed in rows of show cages, often stacked two units high. This can be an alien environment where they will be in solitary confinement, handled by the judges and surrounded by noise from other birds and people. It’s useful to get your chickens used to this by pen training them prior to the show. This will ensure the bird will look its best and remaining calm throughout.

There are various techniques you can use, but in the weeks during the buildup to the show simply getting them used to being put in and removed from a pen or dog crate, talking to them and playing the radio while they are in the pen can make a significant difference to their behaviour on the day. You will also need to prepare the bird (or birds, as many exhibitors will take a show team) in the weeks leading up to the show itself, and of course there’s the final titivations that need applying on the day, but careful planning is essential.

The bird will need fully or partially washing some days before the show (this will allow it to dry fully and for its plumage to regain its form and natural oils), and its feet, leg scales and toenails will all need scrubbing to remove dirt, but the amount of effort put into preparing it for show can depend upon the breed and plumage type. The precise methods of preparing such livestock for show are also often closely guarded secrets, but if you are new to showing, take time to watch and talk to the more experienced exhibitors on the day to pick up hints and tips for next time.

If you want a bit of inspiration, with 7,600m2 of floor space and nearly 2.5 miles of show pens containing the largest collection of the most outstanding examples of poultry all under one roof, the National Poultry Show this weekend is the place to be.

• This post is part of a series on poultry keeping from Andy Cawthray, a self confessed chickeneer who writes for a number of magazines, provides talks & courses on keeping poultry at home and shares his experiences on his personal blog TheChickenStreet.