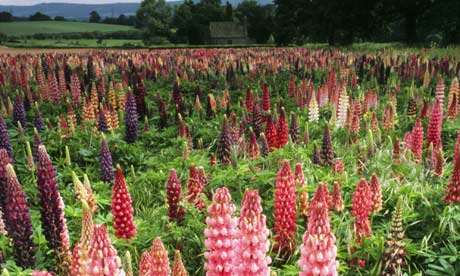 According to Bob Brown, lupins are one of the few perennials gardeners should buy from seed companies. Photograph: Alamy

In this month’s issue of Which? Gardening magazine there’s an article by Bob Brown of Cotswold Garden Flowers, one of Britain’s top plantspeople and nursery growers, about growing perennials from seed.

In it he says: “My experience is that seed of perennials will only reliably germinate if it’s sown immediately, certainly within the month. If it gets as far as a packet or a seed catalogue it’s already too old.” And also… “My advice generally would be not to buy seed of perennials.” Yes, he recommends home gardeners not buy seed of perennial plants. The only exceptions he mentions are “lupins, delphiniums, cactus and other succulents”.

I have a huge respect for Bob: he’s a fine plantsman, a fine grower and as a judge of the Royal Horticultural Society’s plant trials, his insight and unvarnished opinions are invaluable. But, in this case, I’m afraid he’s just plain wrong. The only perennial seeds to buy from catalogues are delphiniums and lupins? I don’t think so. Over the years I’ve raised thousands of perennials from bought seed, fresh seed and seed found in brown paper bags in the back of the shed. Most of it comes up.

It’s a shame that Bob’s recommendation could prevent gardeners from growing a vast range of fine garden plants.

Richard Oliver, the UK manager of Jelitto Perennial Seeds, whose catalogue lists seed of over 3,700 perennials and who’ve been in business for more than 50 years, also disagrees with Bob: “His comment is frankly wrong. Some of the seed packet stuff may be too old, or more likely, have been stored in really unsuitable conditions, but his comments are otherwise nonsense. All the world’s seed banks would be useless if he was right.”

In fact Jelitto told me that their minimum germination percentage on, for example, many achilleas and on Echinacea purpurea is 75%; if a batch of seed has less than 75% germination they just don’t sell it. In fact their tests show that 94% of these seeds can germinate within a week of sowing.

Seed of another popular perennial, Astrantia major, needs a cold spell before it will germinate but actual germination tests at Jelitto show 72% to 88% germination.

For twenty years Derry Watkins has run Special Plants in Wiltshire where she not only raises a huge range of perennials from seed, but teaches seed-raising techniques to gardeners. She also disagrees with Bob: “I think he’s mad. Most perennial seed will germinate after five to 10 years if kept cold and dry. It may not be quite so quick or prolific, but you get the plants you want. Fresh is best, but with good storage conditions, old is fine. I sow two or three-year-old seed all the time without a problem.”

And what do we make of the fact that scientists from the Russian Institute of Cell Biophysics announced last year that they had regenerated plants from frozen seed of Silene stenophylla found in Siberia and carbon dated to 31,800 years old?

Sorry Bob, but we just don’t agree. In your article you emphasize raising plants from seed collected from our own, and our neighbors’ gardens. Fine. But most commercial seed suppliers know how to store seed correctly, and test it regularly, so that when it’s delivered it’s ready to sow, and ready to grow. OK, some needs special treatment. But advising gardeners not to buy seed of perennials at all cuts them off from an economical way to raise thousands of fine garden plants.

• This is an edited version of a recent post on Graham Rice’s Transatlantic Gardener blog. Graham Rice is editor-in-chief of the Royal Horticultural Society’s Encyclopedia of Perennials.