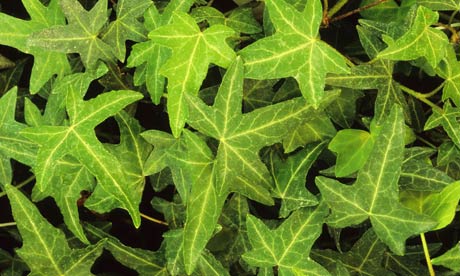 Note from gardening editor Jane Perrone: this post was scheduled to go up before Christmas but technology problems – mine, not the author’s – resulted in a delay. Apologies to all.

The holly and the ivy,
When they are both full grown,
Of all the trees that are in the wood,
The holly bears the crown.

In his 1996 classic Flora Britannica, Richard Mabey hints at the origins of these somewhat cryptic words: “red-berried, festive holly was seen as a man’s plant, and the entwining, black-berried ivy as a woman’s”. In the battle of the sexes, it would seem that holly is the most popular festive greenery, while ivy has fallen from favour. (Forget, for one moment, that it is the female tree of the holly that sports the red berries: the male bush merely bears a smattering of dingy, off-white flowers.)

Though we may not realise it today, ivy has long associations with the festive season. Mabey recounts the tale of a Shropshire farmer who as recently as the 1930s would give each cow a sprig of ivy before 12 o’clock on Christmas day, in the belief this would fend off the Devil until Christmas came around again, twelve months later. Along the same vein, the fate of a leaf of ivy left floating on water on New Year’s Eve and left untouched until twelfth night could predict the future of the gatherer. If it remained in a fresh state, then a happy year beckoned, but woe betide the picker if it bore black spots or, worse still, had withered.

On a jollier note, for those who enjoy a tipple or two at Christmas, ivy has long been thought to neutralise the malign effects of alcohol. Alcohol drunk from a goblet hewn from ivy wood was thought to eliminate the ill effects of the drink. (If only!) Indeed, so intimately associated were drink and ivy, that ivy-covered poles – “ale-stakes” – were used to advertise local hostelries.

And off course, ivy has long been used in Christmas wreaths and other decorations, though since the mid-twentieth century it seems to have increasingly fallen from fashion in favour of holly and mistletoe. Yet in times past, when decorations were picked from the hedgerow and made from scratch, in areas where holly was rare – parts of East Anglia for example – ivy was used as a cheap substitute, its chocolate-brown berries often painted red to mimic the more popular tree.

There is a simple beauty to the single stem of a wandering ivy. The searching stems are gently flexuous, belying their innate urge to reach up to the light. And their three- or five-pointed leaves placed alternately up the stems bear a passing resemblance to a series of bird’s footprints in estuarine mud.  If only the ivy would stop its colonising antics at this point, we all might love it, but as it is, its first few pioneering stems are followed by a phalanx of searching growths that soon bury every tree, rock face or building in a heavy mantle of greenery. This habitat has brought it proponents and detractors alike, for ivy is a plant that you either love or loathe – I know few people who remain indifferent to its lusty growths. Among those who hate it are many a forester, land agent or builder, who argue that ivy has made many a tree or wall top-heavy, bringing them tumbling down. That said, one suspects only trees enfeebled by old age, and walls that have become weakened as the pointing rots, are at particular risk.

To its allies, its cloaking foliage provides summer cover for breeding birds and sheltering bats, and winter refuge for hibernating insects.  Its autumn profusion of nectar-rich flowers provides an invaluable late-season bonanza to so many of our valued insects, before the onset of winter.  And who can fail to be charmed by that most understated of blue butterflies – the Holly Blue – that flits high amongst sunny ivy herbage.  In spite of its name, this beauty is as reliant on ivy as it is on Holly, typically choosing to lay its late season eggs on ivy in favour of holly.  And for the more romantically inclined, cloaking ivy brings a rustic beauty to old ruin or newly constructed wall alike.

On the whole, gardeners have been fans of this adaptable climber, as highlighted in Rosemary FitzGerald’s excellent A Gardener’s Guide to native plants of Britain and Ireland.  Such luminaries such as EA Bowles, Robert Gathorne-Hardy, Christopher Lloyd and William Robinson have all extolled it virtues in writing. Jane Fearnley-Whittingstall, for example, has marvelled at it as “a plant of almost miraculous versatility and adaptability”, while for Robinson it was the “best of evergreen climbers”.

It’s easy to see why: this and the related species within the genus come in a seemingly infinite varieties of sizes, growth forms, leaf morphology and variegation, and there are few, if any, other plants that will tolerate the dry shade of a north wall or grove of trees so obligingly. All too often we merely grow the plant up a wall or fence, yet it can be used to edge borders, cover banks, clothe old trees, and provide a fabulous minimalist ground cover under formal or informal crown-raised trees and shrubs. Any garden soil, provided it is not too wet, will suffice, though it appreciates occasional mulching with leaf mould.

Whatever your views on this vigorous climber, it is difficult not to admire its sheer tenacity. So in the spirit of Christmas goodwill, raise a glass – carved of ivy wood, of course – and toast this natural-born survivor.

• Andy Byfield is one of the founders of the wild plant charity Plantlife.