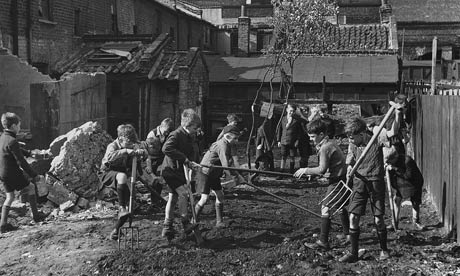 Boys trained by the Webbe Boys Club and supported by the Bethnal Green Bombed Sites Association create an allotment on a bomb site in the East End of London Photograph: Imperial War Museum

Our Wartime Garden at Pig Row has taught us the importance of thinking ahead. A common problem during the war, even though the Ministry of Agriculture ran Food Flashes, published Dig for Victory pamphlets and promoted growing clubs, there were still a few who saw their garden as a summer plot.

Even the Dig for Victory Leaflet No.1 Grow for Winter as well as Summer did little to change their ways. Those who did think ahead often filled the hunger gap that winter brought; though it has to be admitted that we have eaten enough cabbages to last us a lifetime. We have taken stock of our own failings as wartime growers. We didn’t sow our swede and the brussels sprouts didn’t get in the ground early enough. The problem to why this happened was simple: the modern world. The distance we commute to work impacted on the time we had to grow. We could have planted by torchlight but that would have meant us being fined under wartime blackout rules. Though we had no fear of a real ARP Warden, we weren’t going to cheat. We wanted to see if our growing plan could be sustained today.

The sad fact is it can’t, unless we take the same approach growers in the war did to all spaces. We need, now more than ever, to claim back unused plots, just as Incredible Edible Todmorden, South Seeds and guerrilla gardening have done. This has been the real eye-opener in our wartime garden; growing food on a domestic level must be seen as a war to create food corridors, educate others and to stem the tide of concrete. During the second world war railways workers used land by the network to grow; these small allotments put side by side would have stretched from London to Inverness. 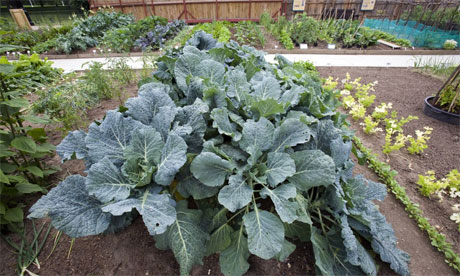 
We do not need more municipal planting, we need food. The statistics show why: 86% of apples sold at British supermarkets in 2012-13 came from abroad. We are pushing beyond the import percentages seen prior to the second world war. We are over reliant on imports and cheap labour, and this does nothing for our health or the people we keep in poverty growing our food. If we grow our own, we may pay the price, as South Seeds did when a developer bulldozed their Agnew Lane site in Glasgow, but I think it is a price worth paying to make a difference.

We can all make this difference by growing outside the place we live, work and commute from. Growing should not just mean our garden or allotment, growing should be everywhere from a window box to a bus stop. They knew that in the war and we should know it still today; we need to see our world as food landscapes. Growing our own food means we have resurrected canning and foraging clubs, worked with people face to face and online to map abandoned fruit trees for harvest time, we have become a food army changing our landscape. That is the real wartime spirit, the ability to work together for a better today and a better tomorrow.

• Life on Pig Row is the story of Andrew and Carol Oldham’s move from urban life to semi-urban life in a small hamlet on top of the Pennines surrounded by the Yorkshire Moors.