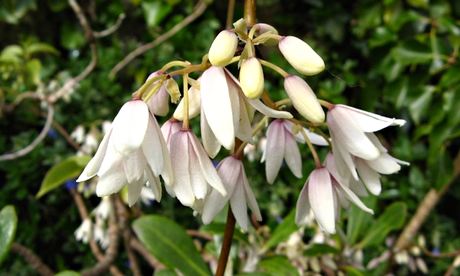 I found myself in a polytunnel recently, sorting out the climbing plants for Sophie Walker’s Cave Pavilion, one of the fresh gardens at this year’s RHS Chelsea flower show. With the weather being quite warm, the temperature was heading up towards 30C. The climbing plants of Holboellia and Stauntonia were flowering more than I have ever seen them before. The heady scent of the flowers was filling the air with notes of cantaloupe melon, cucumber and jasmine. Daydreams, in sepia tones, of holidays past, started to enter my head. The moment was so restful that I stopped thinking about the stress of the few weeks left until the show.

Known as sausage vines because of their bright purple or pink sausage-shaped, edible fruit, these evergreen climbers sit in a family called the Lardizabalaceae. What a mouthful! This family also includes Akebia and Decaisnia. The first of these is known as the chocolate vine, because of the colour and fragrance of its flowers, and the second is nick-named dead man’s fingers, because of its blue finger-like fruit.

Stauntonia and Holboellia aren’t new to British cultivation, although it’s only really in the past 20 years have they become more readily available. Stauntonia was introduced to the western world by Sir George Staunton and named in his honour. He brought it to Britain from China while on a mission to establish trade between the two countries, as part of Britain’s first embassy to the emperor. Holboellia is named after Fred Louis Holboell, superintendent of Copenhagen botanic garden.

The book A General System of Gardening and Botany published in 1831 states: “This plant requires plenty of room to grow and climb or they will not flower” and this much is true. Many, particularly Stauntonias, will happily cover buildings or climb into trees. At home, I grow two Holboellia coreaceae on a fence that runs the entire 20M length of my small garden, and in places you can no longer see the fence. But with a little careful pruning they are neat, tidy climbers deserving of that little bit of effort.

It’s “careful” pruning that’s the trick with them. During late spring and early summer they have the potential to put on metres of new growth and many people are tempted to chop it right back, keeping their plant under control, and thus robbing themselves of any scented blooms. The trick is to cut each of these new growths back to just 2 or 3 leaves, as this is where the following year’s flowers will appear. 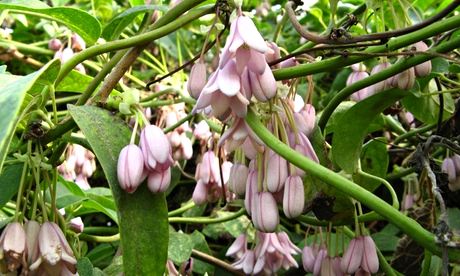 
Recent introductions to British cultivation of Holboellia include H. brachyandra, which smells of cantaloupe melon, as well as H. latifolia, with both dark and light-flowering forms. As for Stauntonia, the deep purple flowers of S. purpurea have re-curved petals, like little pixies’ bonnets. There has long been confusion between Stauntonia and Holboellia. As an example, S. yaoshanensis was originally known as Holboellia grandiflora. My favourite though is S. hexaphylla, with flowers up to 4cm across. These are in pale cream and pink tones, while the leaves are made of five leaflets held elegantly and flushed with coral when new.

And what of that edible sausage-fruit? I like to scoop out the pulpy insides and eat it fresh, spitting out the dark seeds as I go. The thick rind of the fruit can then be stuffed with lentils or minced turkey, mixed with fresh coriander, sweet chilli dipping sauce, soy and lime juice and baked in tin foil. Its slightly bitter taste is reminiscent of aubergine, complementing the oriental sweet and sour of its contents just nicely.

Holboellia and Stauntonia aren’t bold or brash like some climbers can be. But when the smell transports you away from the humdrum of normal life you will thank yourself, as I do, for planting one.

• Robbie Blackhall-Miles is a modern day plant hunter’s propagator and gardener. He is personally interested in ancient families of plants and blogs about these on his website fossilplants.co.uk. He also tweets as @fossilplants.