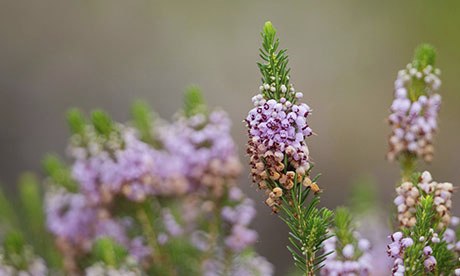 I am never happier than when roving over one of our sublime heathlands in search of flowers. I love the wide open spaces, with their “space and freedom and the friendliness of growing things”, as Michael Home so eloquently wrote of the Breckland heaths in 1946. I love the floral combinations – birch moor-grass, heather – that would adapt so well as a garden landscape. And the abundance of rare plants that give such character to these areas. 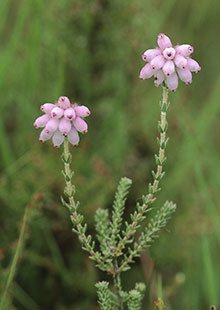 
Heathland landscapes have especially rich assemblages, and are uniquely distinctive because of them: indeed our three most distinctive lowland floras of all reside on heathland: visit the Lizard (West Cornwall), the New Forest (Hampshire) or the Breckland (on the borders of Norfolk and Suffolk) for a really good week’s botanising. The combination of field gentian, spotted cat’s-ear and pygmy rush aren’t just unique to the Lizard in a British context, they occur only on the cliffs and downs above Kynance Cove. And marsh gentian, wild gladiolus and coral necklace together are not merely restricted to the New Forest, they only occur together in the heath, bog and woodland landscape around Beaulieu Road station, a few miles south of Lyndhurst. Such floral combinations are every bit as distinctive and unique to a geographical area as terroir is to a wine region or a dialect to a county: as landscape authority Oliver Rackham would be the first to acknowledge, they give meaning to a particular area.

Heathers (Erica spp.) are, of course, a principal building block of our heathlands. While we don’t have the hundreds of species that South Africa boasts – we can muster less than 10 – what our landscapes lack in diversity they make up in sheer exuberant abundance, as I rediscovered on a late summer trip to the Lizard in early September this year. Cornish heath (Erica vagans) – with its mini rocket spikes of flowers – is arguably the district’s most celebrated plant, and certainly its most abundant rarity, painting the heaths a pastel carpet of salmon-, shell- and candy-pink, before maturing into a rich rust as the flowers die. While Cornish heath is so common, its hybrid with cross-leaved Heath (Erica tetralix) is the opposite: solely confined to the Lizard on earth, this surely ranks as one of the world’s rarest botanical entities. This low, sprawling sub-shrub, noted for its pale pink flowers and the yellowish tips to its leafy shoots, was first discovered around 1860 as a single bush on the northern edge of the Lizard heathlands by a Richard Davey. Nothing is known of the fate of this plant, leaving it to the great gardener, daffodil breeder and local landowner PD Williams to properly document the species following his rediscovery of the hybrid while partridge shooting in late October 1909. By 1924, four separate bushes had been discovered, but then the trial goes quiet for 50 years, until the hybrid was again found in 1974 on heathland further to the south, near the celebrated Kynance Cove. To cut a long story short, a further five bushes have been discovered since then, bringing the grand total to 11 bushes ever known in the wild. For what it is worth, I can lay claim to one of those discoveries, a medium-sized individual found at the easternmost edge of its known range in 1984.

What is so special about this story is that we know the precise histories of each and every one of these discoveries in the wild (except, surprisingly, Mr Davey’s original discovery), and nine out of the 11 wild finds survive in cultivation as separately named cultivars. My bush goes by the name of ‘Cow-y-Jack’ (named after a local farm, not some cartoon bumpkin, and not named by me, I assure you!), and its claim to fame is that it is “by far the best clone of Williams’s heath for coloured spring shoots”, in the opinion of the illustrious Heather Society. That makes me a rather proud father.

Now, when so much is going on in the world around, it may sound a tad introspective to get so wound up in the story of a perfectly nice, yet far from stunning, heather hybrid. Yet it must be a uniquely British situation in which land-owning gentleman spotted a rare heather hybrid while striding across his local heathlands taking pot-shots at luckless partridges (I can picture the tweediness); that he had the nouse to take cuttings and have the plant propagated; that clonal material of that single plant has been carefully nurtured for over a century and is still cherished by enthusiasts today as Erica x williamsii ‘P.D. Williams’ (or Mr Williams’ variety of Williams’ Heather, to you and me); and that all of this has been documented to the nth degree for posterity. In their own way, the stories of each of these individual heather hybrid plants tells us as much about the Lizard Peninsula as a landscape (including its geology and land use history), and about us humans as a species, as it does about the plant itself. And that “meaning”, in my view, is something rather special.

What we don’t know is how those historic bushes fare in the wild today. I suspect that perhaps just two or three continue to survive, but then such singletons are awfully difficult to refind in a sea of Cornish heather, however good your notes. But the nine surviving cultivars are still in the nursery trade and let’s hope that gardeners continue to grow them as much for the living antiques that they are, as for their beauty (they appreciate typical heather growing conditions: free-draining yet moisture retentive acid soils, in full sun). But in my heart-of-hearts, I know that the bees are doing their work as I write this, carrying pollen between the Cornish and ross-leaved heathers, and that it won’t be too long before some observant interloper will discover the twelfth bush of this remarkable plant.

• Andy Byfield is one of the founders of the wild plant charity Plantlife.