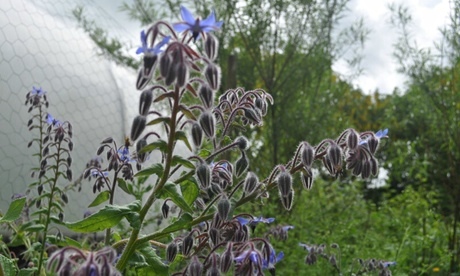 Every year is different (in the garden and otherwise) and presents opportunities and in turn, challenges. This is part of the fun. Right now we have an especially bountiful supply of strawberries in the polytunnels but among them lurk some of largest millipedes I’ve ever seen. There are froghoppers in abundance and even the woodlice are getting in on the act.

I don’t mind though. The frothy shield the young froghoppers hide under is just a minor nuisance and I can’t see any evidence of serious damage to my plants. As for the other enthusiastic strawberry munchers; they are only making a comparatively tiny dent in our harvest, and anyway I’m not at all surprised. This is the third (and last) year for this very large patch of fruit and word has obviously got out.

I won’t have such a large patch of strawberries as this again because I’ve gradually begun to move away from planting one type of produce in blocks or rows and much more into mixing them up. Sure, some varieties need to be grown together, especially those I’m saving seed from, but that doesn’t mean I can’t throw a few others in to accompany them. I’ve found taking a more higgledy-piggledy approach can help reduce a buildup of one type of pest or disease, and I prefer the way it looks. Plus, it gives picking the veg a bit of a foraging edge which I find a lot more exciting than block growing.

Then there are the many reputed benefits of companion planting to tap into. I’ve successfully used a few combinations such as onions around (and in-between) my carrots for years. I know some people doubt whether this actually works but it makes perfect sense to me that if I squeeze some onion leaves after thinning out my carrots; the pungent smell will disguise that of the carrot and help keep the pesky carrot fly at bay. I’m sure the strong-smelling fennel and mint I have dotted about nearby also do their bit.

So, rather than just throwing plants together at random (which I’ve mainly been doing) I’m keen to learn more about which varieties might benefit others and why. Which attract further beneficial insects and wildlife into my garden and generally to see which plants like being around each other.

I first turn to Josie Jeffery’s book; Good Companions – The Mix and Match Guide to Companion Planting, which helps to shed further light and most importantly (ideas) on the matter. Apparently spinach and mint work well alongside strawberries so that’s good to know. Jeffery also recommends leeks with carrots (and onions or marigolds) and basil and tomatoes together for their alleged mutual flavour enhancing properties. I may also try out parsley alongside parsnips to see if that makes any difference to the taste and I will definitely be moving a few of the wild foxgloves that have muscled their way into the back of the garden to the veg patch, now I know they reputedly help stimulate the growth of other plants. I’ll choose some of the more robust looking specimens of this beautiful (but poisonous) flower and plant them about the borders so they can work their magic and self-seed away.

NextI decide to have a look at a permaculture book by Toby Hemenway; Gaia’s Garden, which my friend Alex passed my way. I knew I had quite a few beneficial insect-attracting plants scattered about the place already with (among others) borage and comfrey for bees, fennel and stinging nettles for overwintering ladybirds and others, but I didn’t realise that the celery I’ve been letting self-seed also harbours a range of good guys. Or that the garlic mustard or horseradish I grow also act as a pest confuser. No wonder I’ve never had a problem with carrot fly. 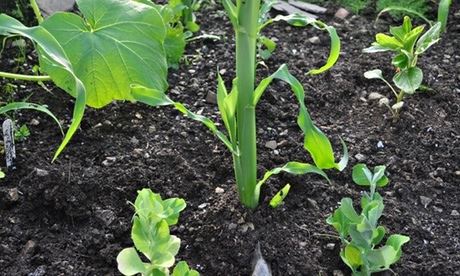 Sweetcorn, squash, pea and amaranth form the ‘four sisters’ guild, where plants benefit each other as they grow. Photograph: Kim Stoddart


I’m very drawn to the idea of learning to create guilds, which means groups of plants that work together to benefit each other in a myriad of natural ways. It’s a complex area so I’m going to try it out first with the three sisters guild (corn, beans and squash), which I’m actually going to make four by adding to the combination some of the Heritage Seed Library amaranth I’m growing.

My head is now reeling with so many prospective combinations and ideas but it occurs to me that I really should make time to speak to Adam Frost on this subject because he enthusiastically extolled the virtues of inter-planting when I interviewed him last year at Chelsea. As luck would have it – turns out he’s experimenting with turning his front garden into an ornamental foraging space this year. Using mint as a ground cover and throwing lots of interesting wild and cultivated perennial edibles together; he’s particularly excited about the decorative qualities of the oca he’s planted.

I am reminded how much I enjoy randomly arranging plants together around the veg patch because I instinctively think they’ll go together, or simply because they look nice. Or the pleasure I’ve gained from letting wild flowers naturally make their home alongside my various shrubs, trees and flowers. I don’t actually know whether these flowers provide any benefit, but they’ve chosen that spot to grow in and their neighbours don’t seem to be complaining. So, while I will weave in beneficial companion planting wherever I can from now on, I can’t see myself doing this rigidly anytime in the near future. I think plants (like us) benefit from varied company, and while some companions are undoubtedly going to have a more positive influence, what a shame it’d be to ignore the others entirely.

As always I’d love to hear your ideas and experiences in the comment section on all matters companion planting and thrifty gardening.