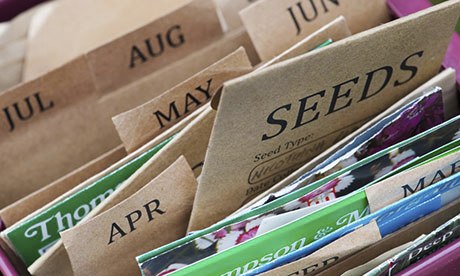 If the proposed EU law on plants and seeds goes through, gardeners’ growing choices are likely to shrink, argues Ben Raskin. Photograph: Alamy

Biodiversity, innovation, choice: these seem like good things, right? When it comes to plant variety, it seems the European commission may not agree. There is a proposed new law which threatens small seed and plant businesses and could lead to a drastic reduction in the range of vegetables and flowers you can buy.

Originally, seed laws were introduced for a very good reason: to prevent unscrupulous seed merchants from selling poor-quality seed of unknown varieties. These laws have been added to over the years, so we now have Plant Breeders’ Rights (which allows breeders to make money on the investment they put into developing new breeds) and more worryingly, the patenting of genetic material.

There are some very sensible testing regimes around seed and plant health to reduce diseases, and of course we have the Trades Description Act and consumer protection laws which should protect the seed-buying public (though insufficient resources mean there are still cowboys out there in the seed wild west).

The EU commission (and more specifically the Directorate for Health and Consumers, who brought this forward) seems to have two main motivations for the new law. The first is paranoia about food safety (heightened by the bean sprout incident of a couple of years ago); the second is a desire to increase exports of seed from the EU to the rest of the world. To achieve these goals, they are looking to sacrifice biodiversity, innovation and choice.

There are already some fairly tough laws regarding seeds of the major food crops, both arable and vegetable. The commission is proposing to broaden these out to all vegetables, flowers and other plants, but also to include what they are calling plant reproductive material (or PRM), which will include baby plants, pot plant cuttings, fruit trees and so on. In the first draft of the law there were major cost and bureaucracy concessions for microbusinesses and seed and plant collections, like Garden Organic’s Heritage Seed Library that may have made it workable, but these have been removed in the initial responses from the parliament.

Defra currently have a very sensible risk-based approach with a simple and cheap registration for seeds destined for the amateur market. As a result there were nearly 700 seed companies registered in the UK in 2011.

There is a growing movement both in this country and across Europe opposing these new laws. Government, industry (seed companies, plant breeders and growers), NGOs and concerned citizens are united in their disbelief and dismay at these proposals. There is a lengthy process of negotiation between the EU commission and EU parliament. The Soil Association and its allies are lobbying hard for a total rethink on this proposal, and has had responses from a small number of key MEPs that show there is some appetite for fighting it, but we still need widespread support. If this law goes through, it is likely you will be paying more for a smaller choice of seeds and plants from fewer, larger companies. So, what can you do?

1. Lobby your MEPs: write to your MEPs and ask them to support a rethink on the proposal.
2. Keep diversity alive: buy some open-pollinated varieties and save your own seed.
3. Support small seed and plant companies by buying from them.

For more information about the proposal and how you can show your support, visit the Soil Association website.

• Ben Raskin is head of Horticulture at the Soil Association